It is getting a lot cooler now that it is officially the month of December, although it never snows here in CA where I live.  That doesn't mean I don't like to pretend I know what it is like to live where snow covers the ground and beautiful trees have light powdery snow covering them, sparkling in the sun.  Although I do have a pretty good imagination, today I used Serendipity Stamps Snow Bunny which is the kind of stamp that doesn't even need an imagination to picture a cute bunny leaving it's tracks around a snow-covered tree. 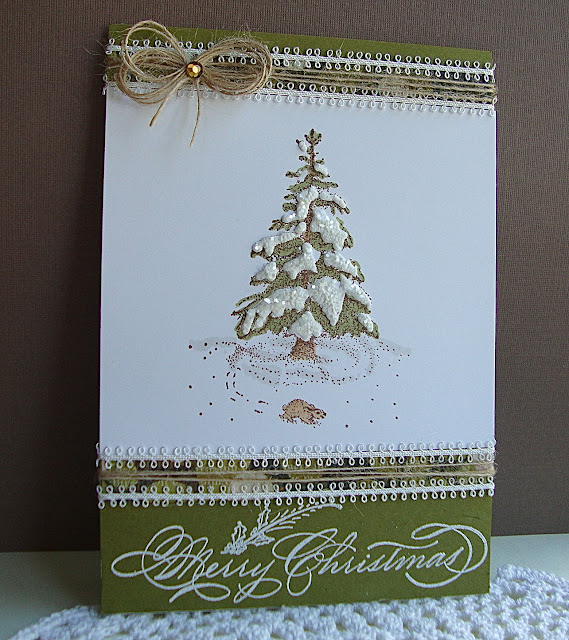 Isn't that a cute bunny?  I used Serendipity Stamps Snow Bunny for my main image and Merry Christmas for the sentiment.  That stamp is really beautiful embossed in white...very elegant.  I colored the tree with copics and added some Marvy Uchida Liquid Applique to create the puffy snow.  After it was puffed up, I smeared some glue on parts of the snow and added chunky glitter for a bit of sparkle.  I added some lace trim and twine to soften the stark white of the main image panel.  I sure wish I could see something like this as I look out my window, but it is much more likely it would be a gopher running in dry brown dirt rather than a cute bunny in snow.  Not quite the same, is it?  Like I said, I have a good imagination.

Oh I love this stamp Cathy and your card is a peek into a beautiful winter wonderland! The snow is perfect and I love how clean your card looks.

Cathy this is so beautiful, the snow looks like it could be a real picture and I love the way you tied your twine bow.

This is such a pretty scene, and that bunny is just adorable. We have lots of wild bunnies here, but no snow either. I really like what you have done with that liquid applique. I need to try that. I know I have some....somewhere.

What a wonderful winter scene! I love the puffy, glittery snow on the tree and that bunny is so adorable! I really like how you did the trim at the top & bottom too--looks great!

This is such a beautiful scene! Love the thick snow on the tree and it glistens . Gorgeous ,elegant Merry Christmas!

Love this! I have this stamp too and will add something dimensional for the snow due to your inspiration.

For a California girl, you sure nailed it!! You brought that tree image to life! It's positively chilly! Gorgeous dimension!

For a California girl, you sure nailed it!! You brought that tree image to life! It's positively chilly! Gorgeous dimension!