(Carly's birthday post is always a long one, I apologize in advance!)

As my daughter Carly's birthday is on Halloween, October 31st is pretty important at the Weber house.  Not only did my kids love decorating the house with all things scary, we also added in some birthday decor to go along with it.
I didn't become "crafty" until my kids were grown, so I was a little late to the game when it comes to making my own decorations, but the last several years I have made some type of Halloween project with Carly and her past birthdays in mind.  Two years ago I made this: 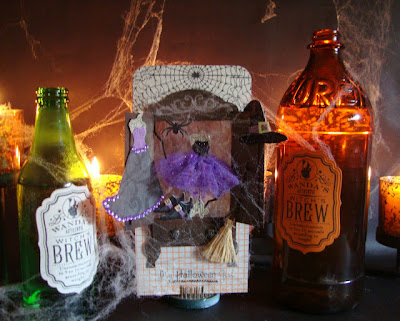 Witches Wardrobe
This was actually a card, but we saved it and will set it out every year.

Last year I made a birthday frame: 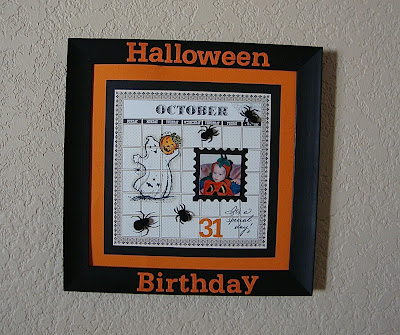 This year, Carly turns 22 years old.  I know!  How old does that make me?  Way too old, but at least I have a lot more time to play with all of my crafty goodies than I did when Carly was 8 years old as she was in the picture below.  As I looked back at Halloween pictures, I realized Carly was a witch for Halloween at least 4 times...so this year I focused on one of her "wicked" birthdays for my project.

Here is my 2013 tribute to Carly's Halloween Birthday: 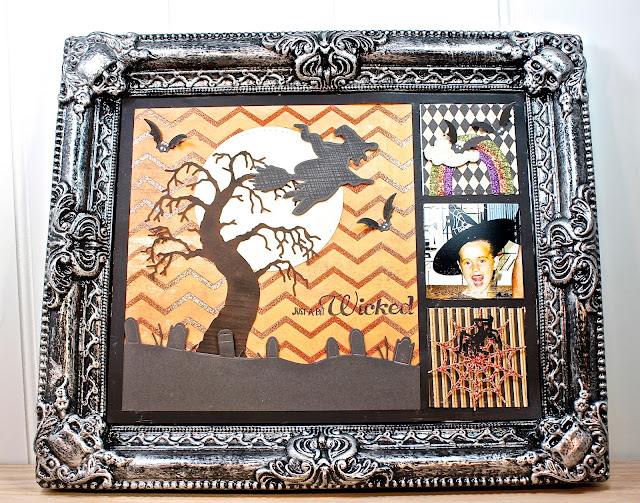 I just received my new Lil' Inker September release stamps and dies and used them to make a dimensional frame.  I took out the hologram image that came with the 10 x 12" frame and created a scene of my own.  First I cut a frame border on my silhouette.  I scaled it so that the three boxes were the right sized to match a Lil' Inker Stitched Mat Square die (detailed picture of Lil' Inker's trademark stitching below).
For the largest square, I used Lil' Inkers new Bats and Broomsticks stamp set as well as the matching die.  Isn't the lined pattern on the stamp a great touch for the witch silhouette? 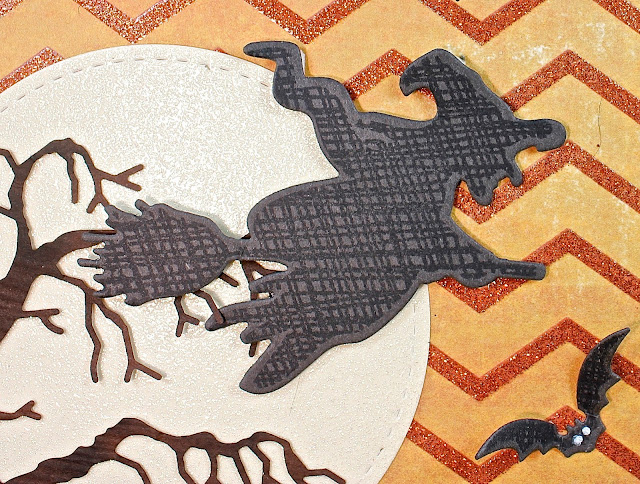 The bats also have that great lined pattern too.

I also used a great sentiment from Bat's and Broomsticks.  All of the sentiments from this set a so different from the typical "kiddy" type Halloween sentiments and are perfect for us "older" witches.  I also added a scary looking tree using the Memory Box Grand Willow Tree die which I embossed with a woodgrain texture and used black ink to shade it up a bit.  The moon is die cut from cream glittered cardstock using Lil' Inker Stitched Mat Circles and the tombstones are also from Memory Box (Graveyard Landscape).  Several of these dies are popped up with dimensional foam and adhered to cardstock from MME (Wicked collection).

For the decorated squares along the side, in addition to Carly's picture, I used Lil' Inker's Rainbows and Clouds die to make a Halloween type rainbow cut from glittery cardstock. 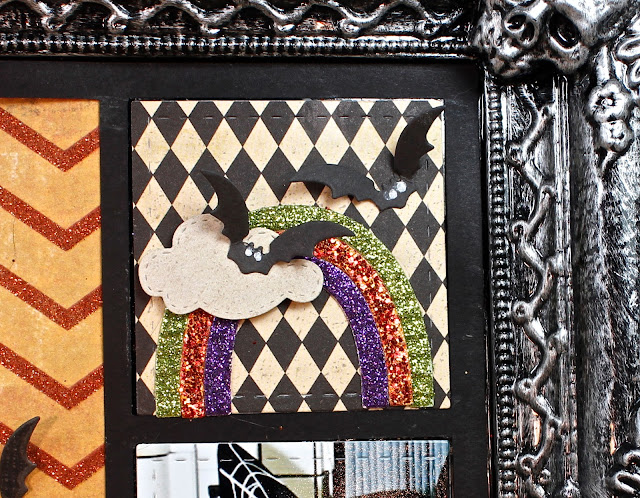 You can see the great stitched detail on the Stitched Mat Squares and cloud in this one.  I also added a few more bats.

For the last square, I had to add a spiderweb and black widow spider.  That story is much too long to tell, but Carly was bitten by one when she was 9 months old and it was a very scary time for us.  I always add something spider-related to her birthday projects. 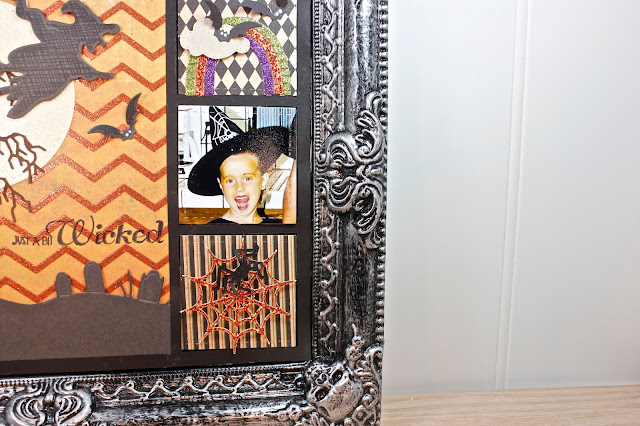 I even cut out Carly's picture with the Stitched Mat Square die...adds a little extra something to such an old photo.
That's it for this year...the frame is all ready to display when I drag out all of my Halloween decorations for the month of October.  Yes, even at 22, the entire month of October is still birthday month for Carly.  One of these days that will change and she will dread adding that extra year, but for now, her Halloween birthday is something we all look forward to.  Thanks for sticking with this very long birthday post.
Posted by Cathy Weber at 7:25 AM

Not sure why but this post brought tears to my eyes. Maybe because our kids grew up too fast.

Well , Carly is one lucky girl to have you for her mom. Love all the projects and this one is amazing. Love the picture of Carly when she was 8 . That rainbow is a nice addition and I love the new witch... I got mine too. This is one scary work of love! Love it!

Wow--can I just say ditto to Marybeth's comment! These are all amazing--not just because they are artistic, creative and beautiful to look at, but because they show the overwhelming amount of love and care you have for your daughter--who is a real cutie pie. Your Halloween birthday posts are never too long for me. Bring it on, I say.

Carly is so lucky! You put so much love and thought into crafty things you make for her. It must be fun have a birthday on such a fun holiday. Love seeing how you've used all your Lil' Inker dies. The glittery rainbow was a fabulous addition!

How fun to have a birthday celebration along with Halloween! love all of your projects here - that frame on this years' project is just perfect!

These are all such amazing creations and such a fun tribute to Carly and her 'wickedness'. I was due to be born on the 31st and have endured a life of my siblings telling me what I may have turned out like. Now I can say just perfect thank you due to your posts. Have a great weekend Cathy!

Carly's birthday month!! :)
And another gorgeous project...
that she will treasure someday.
So much love and goodness in this...
and LOVE that frame!!
It's perfect for this project!! :)

Oh Cathy this is beautiful! I always look forward to seeing what you make for Carly - this is amazing! You made so many beautiful little scenes. I could stare for hours and always see something new here!

Cathy...I at truly at a lose of words, this is simply amazing! What a wonderful and heart felt gift and I am sure Carly will never tire of your incredible gifts. I agree with Marybeth, kids do grow up too fast, way too fast. You really have a way with Halloween, so fun and so spooky!