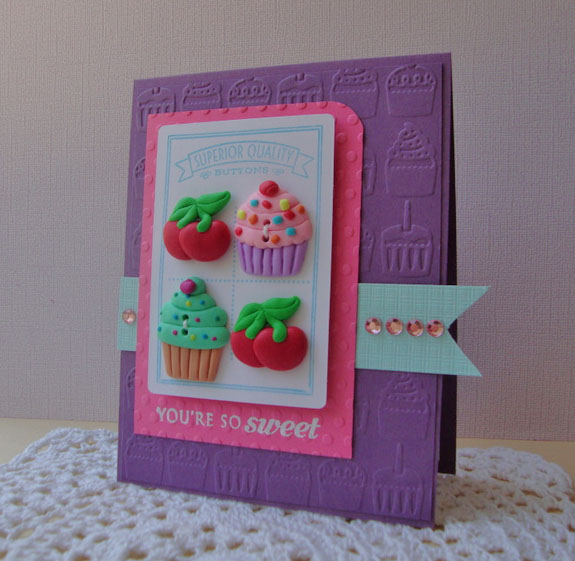 ﻿
Another card today using Button Boutique and some unique buttons.  Unique, because they didn't come from Papertrey Ink, that is.  I have enjoyed making a few button cards for friends lately, so I wanted to try to make another one using a couple of cupcake and cherry buttons I found at JoAnns.   I also have a new Cuttlebug 5 x 7 folder I wanted to try with...you guessed it, cupcakes on it!  I used Plum Pudding cardstock embossed with the cupcake folder and a small layer of Hibiscus Burst embossed with a polka dot folder.  A sentiment from Cupcake Collection is embossed in white on the pink mat.  The button card itself is made from white cardstock with Hawaiian Shores ink.  I just love that I can customize every button card I make depending on the size of the buttons.  These buttons are fairly large, so I didn't use a pinked cardstock square on this card.  I sewed the buttons directly onto the card and since it needed a bit more color, I added a little strip of Aqua Mist cardstock embossed with the linen impression plate.  I cut it to a point and added a few rhinestones for some bling. I hope my friend actually uses these buttons someday on a card.  I would get such a kick out it.
Posted by Cathy Weber at 2:08 PM

What a fun and beautiful card. I love how you tied the cupcake theme together with so many different cupcake elements, and your color choice is just so yummy.
Joyce

What a sweet and fun card! Those buttons are darling!

Fab card! OMG the buttons are just too cute I love them and have to purchase some hehe.

Cathy, these are just so adorable! The buttons look so real! My daughter asked if you can eat them! Super, super cute. Great job with all the color and the embossing!

SCREAM!!
I LOVE it!
The colors are so fun and perfect for this card...
and adore that new embossing folder!
Those buttons are so stinkin' cute...
looks like I need to plan a trip to JoAnn's! :)
I know it will be extremely appreciated and loved! :)

This is just the sweetest (pardon the pun) card I have seen. Love the way you've coordinated everything. I think there might be a run on Joann's for those buttons!

Another wonderful card. The buttons look like frosting and good enough to eat. I will say it aging your very good at this. Thanks for all your kind comments on my blog :)

Oh my stars, this is ADORABLE!!! Love the embossed cupcakes (I've never seen that folder before), and the buttons are fabulous! LOVE!

I am one LUCKY girl!! I just sent you an email and then came over to your blog and saw MY card!! WHOOPPEE!! I LOVE this so much and you are the most thoughtful and generous person!! You totally made my day! I LOVE IT SO MUCH!! Thank you, thank you!! I cracked up when I read the last sentence because I wrote in the email I sent you that I wasn't sure I could take those sweet buttons off the card for a while because I enjoy looking at them so much!! I thought that they might make pretty adorable rings too!! :) Thank you SO MUCH!! You really made my day special!! Hugs to you friend!

How yummmy!! Love your creativity!

I want to eat this card, it is so delicious looking! You nailed it with the embossed background and those colors! And of course those cute buttons!