I have been working on this card for several days now.  I was so lucky to receive some new Serendipity stamps this week and Mary Lee, the owner is so nice to always send me some extras.  In my envelope were two of those unexpected treasures, Folk Santa, large and Folk Santa, small.  Their title describes them perfectly.  Here is the card I made using the cute stamps: 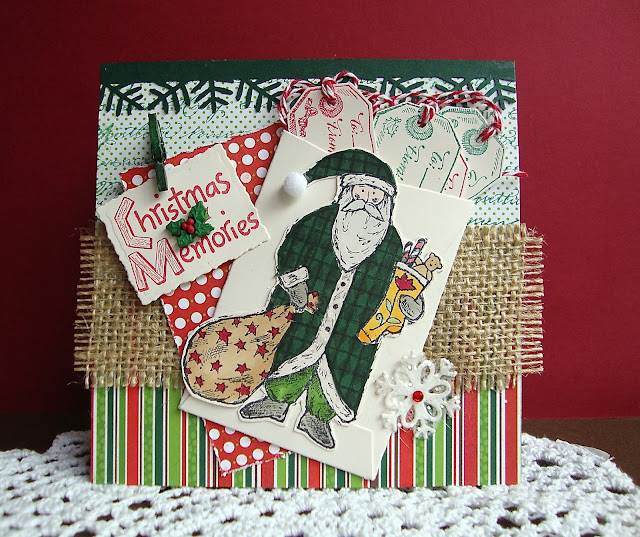 Last Christmas I made my son and daughter-in-law a card that included some little tags that they could use on their Christmas packages.  My daughter-in-law Katie made such a deal about the little tags that she could use that I decided their Christmas card this season had to include a few tags as well.  The patterned paper I used is from Bo Bunny, Mistletoe Collection.  I stamped Serendipity Holly Greens Background text onto a sheet of polka dot paper and used it for my base.  I edged the top of the card with a Martha Stewart Pine Branch edge punch and added a little bit of burlap since I think burlap adds a "folksy" touch.  The focal point is a seed packet from Papertrey Ink.  Isn't that a great Santa Claus image (Folk Santa, large)?  I paper pieced his coat and colored the rest with copics.  You can't see it in my picture, but the fur trim has chunky glitter on it and a little pom pom at the end of his cap.
A glittery snowflake and holly and berry brad add a little more Christmas color. The sentiment is Christmas Memories from Serendipity and is attached using a copic-stained mini clothespin.  Now for the tags, the easiest part of the card because they are already made for you, all ready to cut out and tie a bit of twine around them.
They are also from Serendipity and are called Holiday Tags Set. 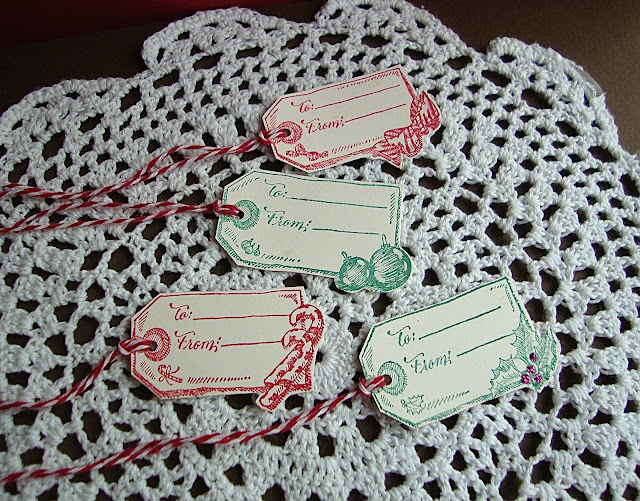 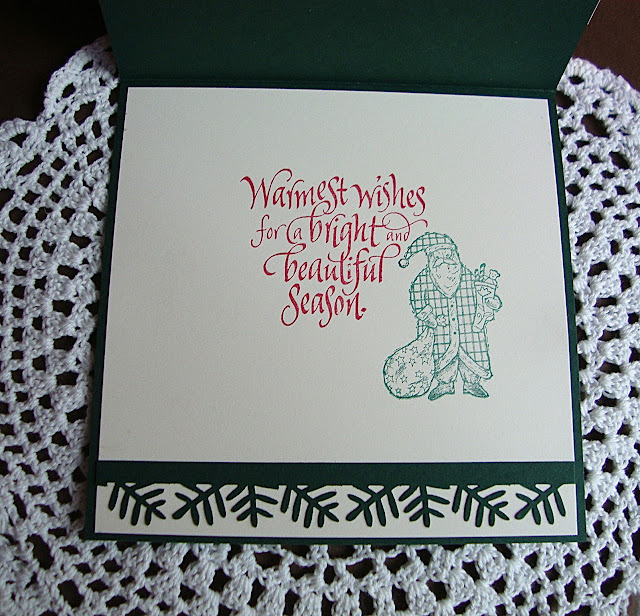 The sentiment is Warmest Wishes by Serendipity and I also stamped the miniature version of Santa (Folk Santa, small) just to follow through with the Santa theme (also, love I just love to stamp this cute image).  He even looks good uncolored!  Make sure to pop over to the Serendipity store, there's a great sale going on.  Just use the coupon code 40FROMHIGH or 40FROM1012 and receive 40% off the highest priced item in your cart.  The sale is good through October 24th.

Adorable card,Cathy! I love that you included tags on this card ,I'm sure they will be a big hit again this year. What a great idea! Love those tags you made !

What a fantastic card and idea Cathy. You have started a trend now with the tags. They are fabulous.

What a wonderful card, and those tags are so fun. What a thoughtful gift to include with your card. Don't you just love it when family members appreciate your talent?

This is amazing inside and out! So many details and pretties to keep me distracted for hours! Love the tags too! No doubt you will be a hero again this year! What a great mom you are!!! Beautiful card that will be tucked away and treasured! (as it should be!!!)

Those folk santas are definitely cute :) And what a great idea to have a Christmas card that includes a gift of tags! I love it :)

I'm totally loving...
and stealing your card with tags idea...
I LOVE it!!
And what a fabulous card...
love all the elements and colors...
and that folkart Santa is precious!!
So are those gift tags...
such a rustic feel to them! :)
Perfect!

Oh my, your Santa and tags are just so classy and beautiful...very rustic and your coloring just amazing too.