I have been feeling a bit nostalgic lately. My kids are grown and my oldest son Matt, is married and is the one who most often is the cook in his family. He often calls me on the phone and asks me how to make something that I used to make for him when he was living at home. This is where I will tell you that, “I am not Paula Deen, Rachael Ray, Giada or any of the Top Chefs.” I never cooked anything that was a spectacular, creative, one of a kind recipe. I am very much like Sandra Lee whose cooking show is called “Semi-HomeMade”. I use frozen or packaged foods to make something that is “sort of” homemade.

As I was scanning the Amber Ink store for something to make for my second project, I spotted some ipaper which really jumped out at me. It is Eat Me, Drink Me-Blue:Tiny.   I decided to use this paper to make a recipe box that I could give to Matt with some of his favorite recipes in it. As an added bonus, Amberink sells recipe card digital stamps that I was able to download to use with this recipe box as well. How lucky was I? The recipe cards are called Back to School Recipe Card: Ingredients and Back to School Recipe Card: Directions

Here is the recipe box that I am going to give to Matt.﻿ 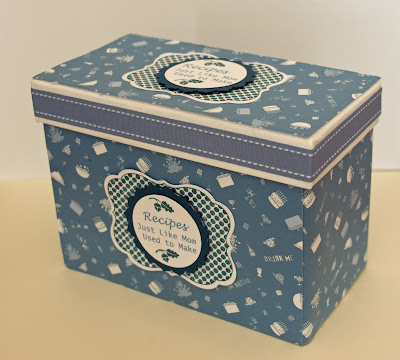 Keep in mind that this is going to a man. Had it been for my daughter-in-law, I would have sparkled, laced and flowered it up a bit, but for Matt, I kept it very plain and simple. I covered a recipe box I got from my LSS with the Eat Me, Drink Me paper and added some PTI Blueberry Sky Saddle Stitch ribbon. I die cut Mat Stack #4 and a Limitless Layer circles from Enchanted Evening cardstock. I used a computer generated sentiment and punched it out with a 1 ¾” circle punch.

Aren’t these just perfect to use with the Eat Me, Drink Me paper? I sized them to fit the recipe box and printed them out on white cardstock. The first recipe I wrote up for Matt was his favorite cake that I only make once a year on his birthday. (All of my kids have a different cake that I only make once a year; makes their day very special.) Even grownups like their birthday to be special. Since his cake is a Strawberry Cream Cheese cake, I had to stamp a few strawberries on the recipe card and some other birthday-related stamps to add a little color and interest. I have written up all of his favorite recipes and plan to do the same with all three of kids. My hope is that years from now, they will open up this recipe box and be reminded of some of the “semi-homemade” food I used to cook for them.
Make sure you check out all of the great ipaper, digital and clear stamps available in the Amber Ink Store. 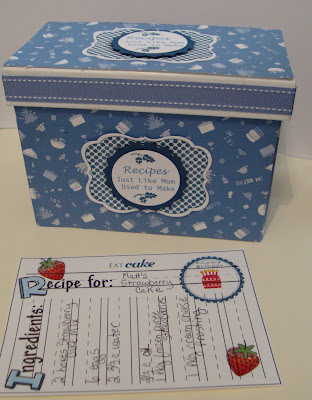 OMG!
Do you know that this exact project is on my "to do" list for my kiddies!!
I want them to all have recipes for themselves...
all the ones that they've grown up with.
This project is perfect...
LOVE it!
And Matt will too!

Oh, this is so cute. Definitely perfect for a man! Masculine, yet functional. :) Great job!

Excellent recipe box! I like it for the plain approach. Cute recipe cards. Thanks for the link to this site.

This recipe box is perfect for a guy.I have planned to do this for my boys for some time now, even bought the boxes, and that is as far as it has gotten. I'm sure your son will love this!

SUPER FUN Cathy!! I love the details you put on the cards and the colors you used are PERFECT!!!

Wow, great job with this! So many fun details! You did a wonderful job!

I SO love this - finally got it up on the inklings blog today! Thanks for such a great project Cathy!