Today I was inspired by a card made by Lisa Johnson back in February using Mat Stack 4.   I have been making cards for every family member for the past year with the exception of my brother.  He's a police Captain, very serious all the time and just not someone who I thought would appreciate a handmade card.  I actually bought his card last year, but this year I was determined to make him a card regardless of whether he will even notice.  I am the oldest of three and my brother is the youngest, something he never lets me forget.  He is always reminding me of my actual age and a few weeks ago I was kidding with him and told him I was going to write his age all over his card.  Don't think he expected me to really do it, but I did.

Here is the card I made based on Lisa's card with a few changes of my own: 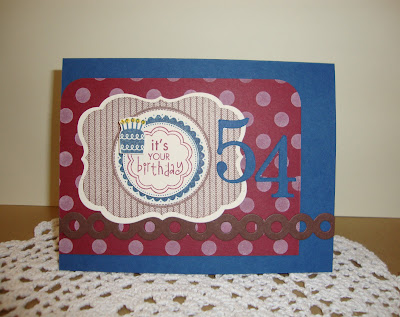 Lots of PTI goodness on this card.  This is the first time I used the Mat Stack 4 set.  I think this set is the absolute perfect stamp set for masculine cards.  I also used Tag It #1and a sentiment circle I have had for a long time (don't know from where).  I cut the number 54 on my cricut using the Century font.  As if that number 54 wasn't big enough, I had to decorate the inside of his card too.  What do you think?  Is the number 54 big enough? 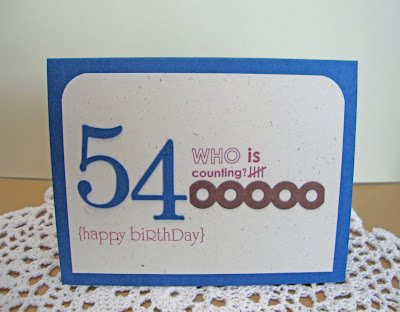 That ought to shut him up until at least his next birthday!
﻿
Posted by Cathy Weber at 7:00 AM

Wonderful!
Love it!
And love how you're "getting back" at the bro!
Honestly...if he's the youngest...
and you're the oldest...
you could have fooled me with your age in a heartbeat!
You look fabulous!

Great fun card!! I really like how you've layered all the goodies on your card front and the inside is another little jab at the age!! Hehehe!!

Fabulous! I think he will be well and truly speachless and suitably impressed! I sure am. Such great masculine cards. Thanks for the inspiration. I enjoy your work immensely.

Ooh, the circle sentiment in the first card is a Hero Arts one. Love that set as it is a handy one.

Cathy, this card is fun, fun, fun! Love the colors you chose and how it will definitely fit for a masculine card. Hehehe about reiterating the "54" on the inside, too. You are so mean! ;-)

What a fun card. Hope it works!
TFS
Ang

Hi Cathy,
I love your work the colors are just beautiful.
I became a follower of yours and I hope that you return the favor I'm new to blogging, so I could use all the followers.
thank you

Cathy that is too cute! I love that you purposely made the number large and then said taht that ought to shut him up until next year! Too funny!!

Love this, especially that border on the inside!

Cathy Your card is perfect, for someone born in that great year of 1957. Im sure your brother will love it. Love the colors too. Take care.