There is a new Muse in town, Maile Belles, a designer followed by many, many of us who love to make cards is the muse for the next few weeks at Case Study Challenge.  I have so many of Maile's cards pinned and have watch her blog daily for anything new she might create.  The card this week (Case Challenge #139) is textbook Maile, so CAS but with a twist.  Here is Maile's card: 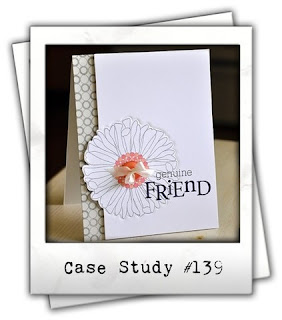 What did I love about it?  The stamping on the short panel and that great partial die cut image on the front panel.  Maile does this neat thing with partial embossing and cutting all at the same time.  I have to admit, I have not been successful with this technique, but a little light bulb went on and I realized I could do something very similar using my Silhouette Cameo (probably a million people have thought of this idea already), but it was new to me! 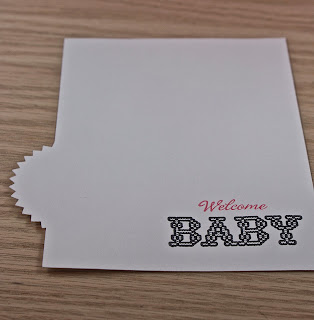 I drew a rectangle in A2 size and also a pinked circle, overlapped them and welded them together which gave a similar look to Maile's card. 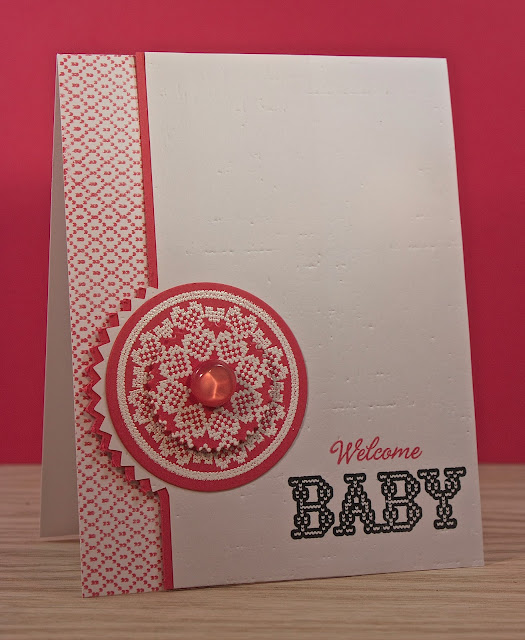 I stamped Waltzingmouse Stamps Nordic Winter background and overlapped it with the pinked circle layer, in both Berry Sorbet and white cardstock.  The white layer in impressed with the linen/canvas impression plate by PTI.  The beautiful medallion is from Waltzingmouse Nordic Baby, as is the sentiment.  I embossed it with white embossing powder and added a popped up center layer and button.

I was happy with this card, but now that I have discovered how to recreate Maile's partial die cut technique, I wanted to take it to another level. 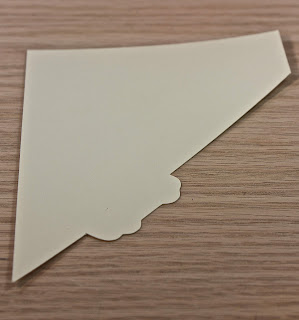 I took a cute fire engine die and scanned it into my computer.  Then I went into the Silhouette software and imported it, traced it and welded it onto a rectangle I had drawn.  It is the exact same look, but now I have a stamp I can use that matches it perfectly! 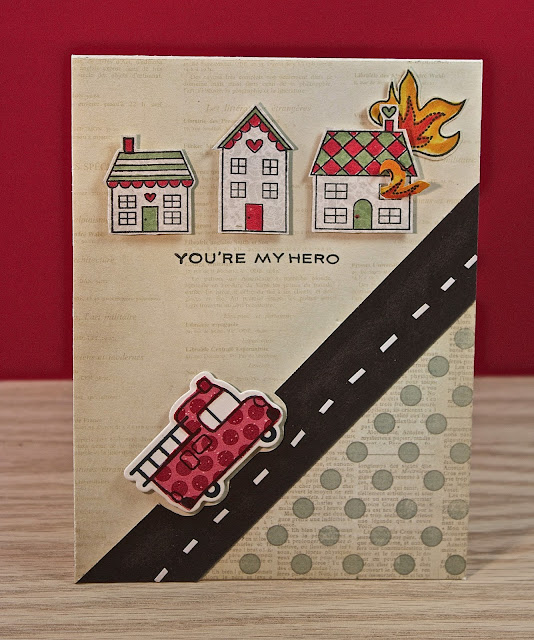 This card is going to my son Andy who is a firefighter paramedic.  In reality, he has very few house fire calls, but it was a good excuse for me to use a stamp that has never seen ink before, Neighborhood by Market Street Stamps.  The fire engine is from Papertrey Ink (Boy Basics Truckin It), the sentiment is also PTI (Star Prints) and those great flames...PTI (Boy Basics Out of this World).  I even cut open a window to let some of the flames escape.  The patterned papers are from MME (Cowboy) and the roadway is just smokey shadow cardstock with little bits of white paper glue sticked to it. 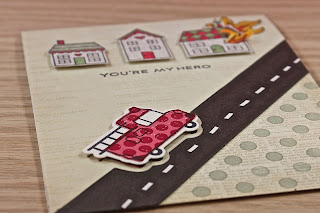 Can you tell that Maile's card really inspired me this week?  I am very excited to see what next week's inspiration card looks like...I'm betting CAS, but with a twist!
Posted by Cathy Weber at 10:45 AM

Cathy--you have outdone yourself with your brilliance. I love both cards. That first one--the partial die cutting and all those layers--truly a one of a kind beauty. And, your second card--just amazing for your son, and the flames coming out of the house, and the fire truck rushing up the road--just fantastic. I am so impressed with all that your Silhouette can do with you at the helm.

Cathy both of your cards are just fantastic! Love your beautiful welcome baby card. Yay for you creating the die with your Silhouette, one of my favourite uses for mine!

They're both so cool...
love the baby card with the medallion stamped on the cutout like that!
But I knew as soon as I saw the firetruck who this card would be for...
and it's so cool!
He's gonna love this one...
it's perfect! :)

Your baby card is so sweet! The texture is wonderful and I love the little gem in the center!

Love both of these! Love the cut aways. Thanks for joining us at CASE Study this week!

Such a fabulous card! Love the engine going uphill to save everyone!

OMG I LOVE these! That baby one is amazing, and I just love the technique. I am dying for a Cameo! It is my goal to have one by the beginning of summer :) I don't quite understand partial die-cutting either. I'll think I have it and get to my CB and end up making a mistake. Your little fire truck card is beyond clever and so adorable..great for little AND BIG boys ;)!